Maha Shivratri is a prominent Hindu festival celebrated each year in honour of God Shiva. The name refers to the night when Lord Shiva performs the heavenly dance. However, Shivratri aka Masik Shivratri comes every lunisolar month on Trayodashi or Chaturdashi of Krishna Paksha. But Maha Shivratri comes once a year in late winter (Feb/March or Phalguna). It is celebrated most commonly as “the most important night of Lord Shiva”. The major festival of Hinduism SHIVRATRI marks the remembrance of “overcoming ignorance and darkness” in the world.

Dates of Maha Shivratri In 2021

This year 2021 you can celebrate Mahashivratri on 11th March, Thursday.

The festival is celebrated by fasting, chanting prayers, meditating and exchanging words of wisdom on ethics and virtues such as non-violence, forgiveness, charity, and the discovering Lord Shiva in our inner self. Many of the devotees stay awake all night and others visit one of the Shiva temples and even go on pilgrimage to Jyotirlingams. According to the South Indian calendar, Maha Shivratri is observed on Chaturdashi Tithi during Krishna Paksha in the month of Magha. While as per North Indian calendar, it is celebrated on the 13th/14th night of waning Moon in the Phalguna.

Maha Shivratri is one of most splendidly celebrated festivals across the country by performing Shiva Ratri puja one time or four times. Below are the Muhurats of performing Shivaratri puja to bestow happiness and prosperity in your life.

Know How Worshipping Lord Shiva On Mahashivratri Will Lead You To Salvation.

Legends Behind Celebration Of Maha Shivratri

Why do we celebrate Maha Shivratri? BTW, there exist many stories behind the celebration of Maha Shivratri. According to Hinduism, the festival is celebrated to mark the marriage of Lord Shiva and Goddess Parvati also known as Shakti. The legend states that worshipping Lord Shiva and fasting for the whole day can reap the benefits of rigorous praying to God for the whole year. Women pray to Lord Shiva on Mahashivratri to get blessings for their husband as omnipotent as Lord Shiva.

Another Puranic legend talks about Samudra Manthan, the great mythical churning of the ocean by the gods and demons for obtaining the nectar of immortality. Unfortunately, the poison ‘Halahala’ came out first. Lord Shiva consumed the poison holding it inside his throat thus saving the whole world. That is why his throat turned blue, and so he is often revered as Neelkanth. Hence, Maha Shivratri is also celebrated as the day of gratitude to Lord Shiva for saving the world from the deadly poison.

According to the third legend, Brahma and Vishnu were arguing which one among them is supreme and more powerful. Just then emerged a gigantic Lingam which left both of them amazed and overwhelmed. They wished to find out its height but it seemed to be stretched into infinity. Lord Shiva emerged from the Lingam and declared that ‘He is supreme of all three (Trinity)’ and must be worshipped in the Lingam form.

Since that day Rudrabhishek is offered to Shivling to appease Lord Shiva.

Find out what the stars have in the store for you on MahaShivratri through your Personalised Daily Horoscope!

Now you have a complete understanding of the legends behind Maha Shivratri, let’s see why it’s significant to perform fasting on this day and what benefits it reaps for us.

Why Do Devotees Perform Fasting On MahaShivratri?

The story reveals how an ordinary hunter who fasted unknowingly on Mahashivratri attained salvation. The hunter went to the forest searching for prey. He was unknown to the fact that a Shiva Lingam was under the tree nor that it was the festival Mahashivratri. Awaiting his prey the hunter kept plucking the leaves from the tree and kept dropping them on Lingam. During the first quarter of the day, a deer came to drink water. When the hunter tried to kill the animal it pleaded for mercy as its children were waiting for it. The hunter let it go. In the second quarter, the deer’s children came there, and out of compassion, the hunter did not kill them either. Thus, all the four quarters passed with the hunter dropping Bilva-Patra on the lingam without eating anything. The legend says that Lord Shiva himself appeared before the hunter, and that is how the hunter attained Salvation.

Consult Vedic Astrologers To Know What This Auspicious Mahashivratri May Bring Into Your Life.

Devotees are required to wake up early on Mahashivratri morning. You must take a bath, wear fresh clothes, and visit the nearest temple or even at home provide a ritual bath to the Shiva Lingam (with honey, milk, water, etc). The majority of people worship Lord Shiva the whole day and night. The next morning you can break your fast by partaking prasad offered to Lord Shiva. You would find devotees chanting hymns and chanting ‘Om Namah Shivaya’ mantra for the whole day and night. You must offer Bel-Patra leaves to the Lingam.

You need to worship Lord Shiva on Mahashivratri by following given rituals. 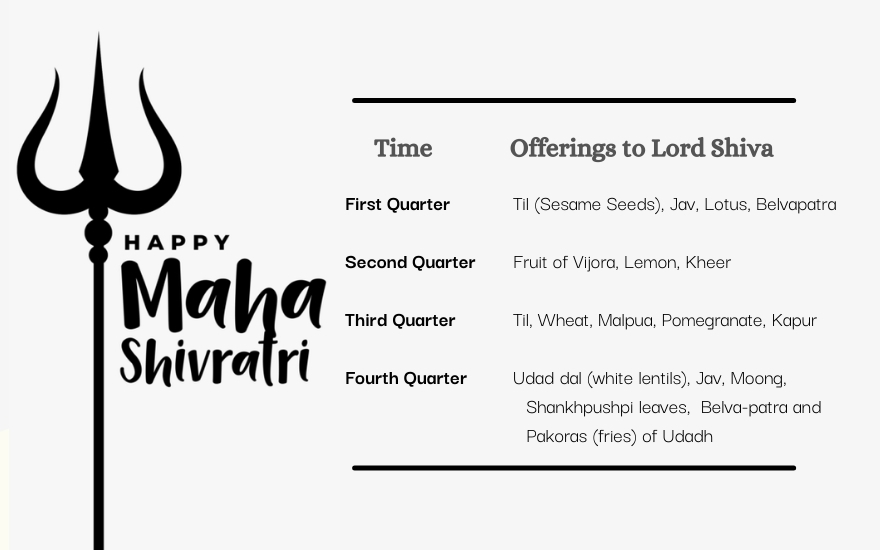 Mahashivratri falls just before the ‘Amavas’ – the night with no moon. According to Vedic Astrology, during this period the moon is squeezed between two malefic planets. Thus, the Moon is weak. Jupiter (spiritual guru) aspects the Moon by 5th Drishti, sights and lends energy for spiritual effort during the particular time. Jupiter is in the 12th house during Mahashivratri, leading to detachment from materialistic life and the awareness of the spiritual journey through human life and release from the cycle of birth and death. Praying Lord Shiva on Mahashivratri may strengthen your Moon and direct you towards the path of salvation.

Unveil all the strong and weak planets in your birth chart. Get Free Janampatri Now!

Till the arrival of Mahashivratri, Surya Dev reaches Uttarayana. The time calls for a change in season. This time is auspicious and welcomes the spring season. The season of spring fills the mind with joy, passion, and happiness. Also, Kamadeva is brought to life by Lord Shiva during this period. The cupid emotions generated in this period may be controlled only by worshipping Lord Shiva. According to Vedic astrologers, the 12 Jyotirlinga have a strong relationship with the 12 Moon signs.

Relationship between 12 Jyotirlingas and 12 Moon Signs

Many mythological sagas are found in ancient Grants and Puranas about Lord Shiva. Stories state that Lord Shiva, Trishul, and Damaru are strongly associated with 9 planets. Similarly, 12 Jyotirlingas are in a strong relationship with 12 Moon signs. Walkthrough the connection between Jyotirlingas and Moon Signs below.

What Are Benefits Of Worshipping Lord Shiva?

Makar Sankranti - A Harvest festival of gratitude, ritual and fun!